The European Commission has recently published the 2019 edition of the European Innovation Scoreboard (EIS). 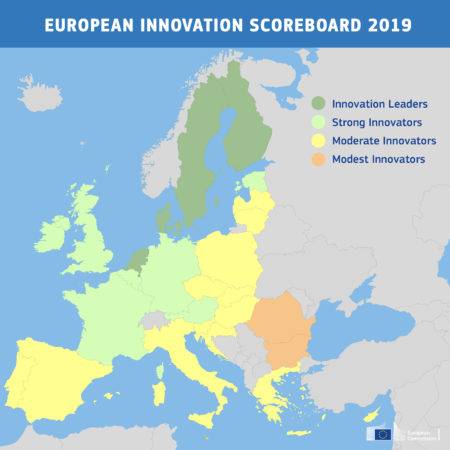 The European Commission has recently published the 2019 edition of the European Innovation Scoreboard (EIS). The annual scoreboard is a way of measuring and comparing the relative performance of European countries in terms of innovation against 27 indicators. It also includes an analysis of the strengths and weaknesses these countries need to address in order to boost their performances.

Luxembourg ranks 5th in terms of overall performance and is classified as a “Strong Innovator”. Though Luxembourg gains a position compared to the previous year, the country’s general score has increased. However, it is no longer labelled as an “Innovation Leader”. Sweden once again remains the number one innovation leader, followed by Finland, Denmark, the Netherlands. The UK loses ground and ranks 6th after Luxembourg, while Belgium progresses (7th) and overtakes Germany (8th).

Luxembourg research systems is ranked as the most attractive in Europe. The country’s performance exceeds the EU average with 93%, due to its ability to attract foreign doctorate students and to produce international scientific co-publications. In addition, Luxembourg’s intellectual assets (trademark and design applications) rate 58% above EU average, and innovators especially in SMEs feature 40% above EU average.

Furthermore, Luxembourg also performs well in human resources, exceeding the EU average with 28%, in particular regarding the share of population with tertiary education and lifelong learning. In addition, with 35% above EU average, it performs well in creating an innovation-friendly environment through providing broadband penetration and opportunity-driven entrepreneurship.

A fertile ground for innovation

The EIS reflects the results of the Digital Economy and Society Index (DESI) 2019, especially in terms of skilled human resources available in the country and broadband penetration, which both contribute to creation of an innovation-friendly environment.

According to DESI, Luxembourg’s best performance is in connectivity area, in which it now ranks 2nd among the EU countries. This is due to the wide availability of fast and ultrafast fixed and mobile broadband networks, as well as to the increasing take-up levels for fast and ultrafast broadband. The country is fully covered by fixed broadband networks, a fundamental mean allowing unleashing all the innovation potential of automotive industry to develop automated driving and use 5G technology for instance.

Luxembourg ranks 3rd in human capital, with a slight improvement in its score compared to DESI 2018. The percentage of individuals having at least basic digital and software skills is well above EU average (Luxembourg ranks first for this criterion), while the share of ICT specialists as a percentage of the total labour force has increased to 5% and is well above the EU average of 3.7%.

These are fundamental ingredients of an innovation-friendly environment and crucial enabler factors of innovation.

Brexit & the UK participation in Horizon 2020

The UK and the EU have agreed a flexible extension of the Article 50 period to 31 January 2020. During this period, the UK will remain a member of the EU with all the relevant rights and obligations. This means that UK organisations can continue to participate in Horizon 2020 as a Member State.
Read more

The INNOWWIDE pilot call intends to bring European highly innovative SMEs to the forefront of international markets by opening two calls that will allow them to conduct Viability Assessment Projects (VAPs) in cooperation with local stakeholders. It will, then, create the conditions to increase the uptake of European innovative solutions in markets outside of Europe. The VAP lasts no longer than six months.
Read more

The new grantees will have a chance to build up their teams and have a far-reaching impact.
Read more

Building digital capacities in Europe with the Digital Europe Programme

Luxinnovation’s EU Funding team has compiled all important upcoming  info days, brokerage events, congresses and conferences for the end of the year and the first months of the next year.
Read more