5 things to remember about Luxinnovation in 2019

At the end of May, the national innovation agency presented a report on its activities in 2019. It was a rich year that highlighted more than ever the importance of the agency's work with the country's businesses... but not only.

Home » 5 things to remember about Luxinnovation in 2019 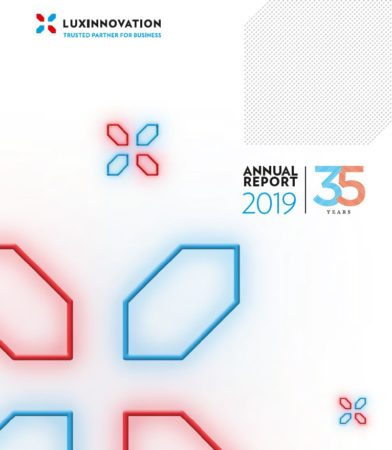 Reform of the Cluster Initiative, with an even more client-oriented approach; launch of the Luxembourg Digital Innovation Hub at the service of Industry 4.0; presidency of the European association Taftie of national innovation agencies; development of the Fit 4 Start acceleration programme with an opening to companies in the space sector: the year 2019 has been very intense at Luxinnovation.

The national agency for the promotion of innovation, which celebrated its 35th anniversary, has multiplied its initiatives and support for national companies and start-ups, while actively investing in its mission of prospecting and promotion at the international level.

Here, in five key facts, is everything you need to know about the year 2019 without having to ask…

One of Luxinnovation’s historical missions is to accompany companies in the implementation of their R&D and innovation projects. This involves, among other things, helping to prepare the application files for public aid issued by the Ministry of the Economy.

145 aid applications (for R&D and innovation and for environmental protection) were thus approved in 2019, a 30% increase compared to 2018.

With more than 510 applications from over 60 different countries submitted in 2019 for the two sessions (spring and autumn), the Fit 4 Start Acceleration Programme has grown by 30% compared to 2018.

At the same time, the teams dedicated to start-ups have supported the creation of 75 new innovative start-ups, representing a 17% increase compared to 2018.

Twice as many individualised supports

By focusing more on the organisation of clusters on the needs of companies, and by favouring the organisation of inter-sectoral events, Luxinnovation has strengthened its presence among its historical “target audience”. This has enabled the various cluster managers to provide no less than 422 individualised and tailor-made support services to companies of all sizes and in all sectors. This is almost twice as much (+90%) as the 222 recorded the previous year.

Supporting private and public actors in their search for European funding is also part of Luxinnovation’s missions, particularly in its capacity as national contact point for the Horizon 2020 framework programme.

The amount of financing obtained remained at a high level in 2019: 32.9 million euros, compared to 32.5 million euros in 2018. More than 100 participants were involved in new contracts signed for H2020 projects, mostly public research organisations and university researchers.

With a success rate of 17% for funding applications, Luxembourg performs much better than the European Union (12%).

Since the integration of the activities of the promotion agency Luxembourg for Business in October 2016, Luxinnovation has been very active in international promotion and prospecting, focusing more particularly on three sectors: automotive industry, digital economy and cleantech.

Nearly 300 companies showed a direct interest in setting up in Luxembourg, double the number recorded in 2018 (147). These expressions of interest led to 68 visits (compared with 42 the previous year) organised in partnership with the Ministry of the Economy and the Chamber of Commerce’s House of Entrepreneurship.

The 2019 annual report can be downloaded online from Luxinnovation’s website. You can also request a print copy (only available in English).

DigiJourney idea raises from the participation of two innovation agencies and a research institute, FUNDECYT-PCTEX, LUXINNOVATION and IPA-SA, in European projects related to digitalisation and their expertise in the field. As a result of the peer learning process, this Design Options Paper (DOP) provides other European innovation agencies with recommendations for improving their digitalisation support services for companies in their territories through a well-designed digitalisation client journey aligned with other supportive schemes that favour the implementation of digitalisation measures to improve companies’ competitiveness.
Read more

The 24th edition of the Innovation Prize awarded by FEDIL is currently under way. The deadline for submitting applications has been extended until 20 July to allow companies to better promote their innovative projects.
Read more

With the Creatives Unite platform, the players of the creative and cultural industries (CCIs) have a tool to share good practice and experience related to the current health crisis. IPIL is one of the stakeholders of the European project “FLIP for CCIs”, which supports this initiative.
Read more

Luxembourg one of Europe’s innovation leaders

The European Innovation Scoreboard, published by the European Commission, ranks Luxembourg among the EU’s innovation leaders. The main reason is the country’s attractive and efficient research ecosystem.
Read more

The quality of life of senior citizens is at the heart of several European funding programmes for research and development activities. Luxembourg companies are invited to join transnational consortia to benefit from this financial support.
Read more