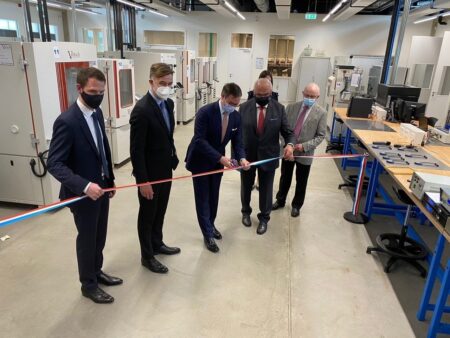 On 30 April 2021, H.R.H. the Hereditary Grand Duke of Luxembourg and the Minister of the Economy, Franz Fayot, inaugurated Cebi Luxembourg’s new state-of-the-art testing laboratory, the only one of its kind in the Greater Region.

This was the culmination of a project initiated in 2015 and for which the company also relied on the advice of Luxinnovation.

In 45 years of existence, Cebi Luxembourg (ex-ELTH) has experienced a constant growth and has evolved into the centre of expertise for Cebi Group’s bimetallic thermostats, temperature and level sensors, heaters and washer systems, as well as various household components.

In response to an increase in its activity as well as to the continued progression of technical requirements and product complexity, the company kicked off a major investment project in May 2015.

The aim was to develop new facilities to host the entire R&D and testing area, along with a significant upgrade in test capacity and capability to allow full services on-site.

“The purpose was to co-locate the R&D department across competencies to facilitate collaboration between product and process areas with testing integrated in such a way as to encompass the complete development process from end to end,” explains René Elvinger, CEO of the Cebi Group. The objective was to speed up the development and accelerate product innovation.

Following discussions with the Ministry of the Economy and Luxinnovation, Cebi Luxembourg S.A. was the first company to be granted an investment aid for research infrastructures in the context of the law of 17 May 2017 on the promotion of research, development and innovation.

The tear-down of the old facility started at the end of 2018, and was followed by re-construction work as of 2019. The new laboratory was finished in October 2020 and the new R&D offices were opened two months later.

The new facilities significantly increase the capability and capacity of Cebi’s laboratory to meet future needs of the Group and to serve a large range of external companies.

In addition to the symbolic significance of the event, this official inauguration on 30 April also marked the beginning of a new external service offer, dedicated to any company in need of testing services. This opportunity lies at the heart of the requested aid scheme.

“The new facilities significantly increase the capability and capacity of Cebi’s laboratory to meet future needs of the Group and to serve a large range of external companies,” confirms Etienne Jacqué, Corporate R&D Manager.

With some rare equipments

The site offers more than 1,000 m2 of laboratory space equipped with some fifty machines for state-of-the-art testing and validation under severe conditions.

The acquisition of some of this equipment which is rare in the Greater Region, was made possible thanks to the financial support provided by the Luxembourg government. This is the case, for example, for large vibration benches, thermal and climatic chambers with temperatures ranging from -70°C to +300°C, as well as state-of-the-art EMC chamber meeting automotive and even aerospace standards.

The support of Luxinnovation was all the more valuable as Cebi Luxembourg, which is also a member of the Luxembourg AutoMobility Cluster, was the very first company to apply for this investment aid for research infrastructures.

“A number of questions had to be addressed, particularly around the availability of facilities for external customers,” explains Etienne Jacqué. Luxinnovation quickly became active in promotion and matchmaking, not only at the national level but also through the Greater Region channels (Autoregion, Interreg PAE, etc.). This has resulted in a steady flow of first contacts, many of which led to testing activities. “This is ongoing and seen as a unique element of Luxembourg’s attractiveness for established and new players.”

Cebi is a perfect example of how a sustainable manufacturing business can develop in Luxembourg through entrepreneurship, innovation and diversification, all supported by a strong industrial policy.

Moreover, the testing projects currently underway with several companies in the Greater Region go far beyond the automotive sector. Items like water dispensing valves and spacecraft electronics have been tested already.

“Cebi is a perfect example of how a sustainable manufacturing business can develop in Luxembourg through entrepreneurship, innovation and diversification, all supported by a strong industrial policy,” concludes Anthony Auert, manager of the Luxembourg AutoMobility Cluster.

Towards a sustainable economy

Sustainability is now an essential dimension of any economic thinking. Initiatives abound, in both the public and the private sectors. LIST and WAVES provide an example.
Read more

Circular by Design Challenge #2 on track

The second edition of the Circular by Design Challenge was officially launched this Friday, during a webinar specially organised for the occasion.
Read more

How to manage innovation well

Innovation management was on the agenda of the 3rd session
of the Club Innovation held on 12 October.
Read more