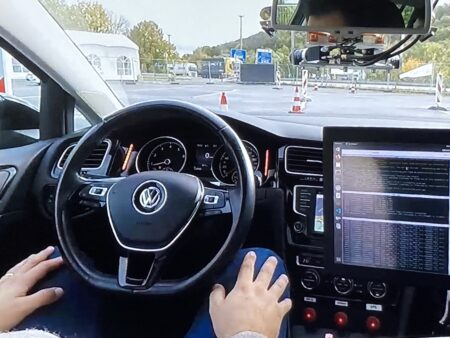 Connected and autonomous mobility is still a fantasy for many. But technological developments are already making it possible to discover what could be the reality of tomorrow, or the next day.

The European pilot project 5GCroCo (5G Cross-Border Control) is one of these experimental development projects for connected, cooperative and automated mobility, set up between Luxembourg, Germany and France to provide services.

It has a budget of €17 million, of which €13 million are financed directly by the European Commission.

This project follows on from the presentation in Schengen in spring 2019 of the digital cross-border experimental site project initiated by Luxembourg, Germany and France. There could not be a better place than this town, located on the three borders, to meet again on Thursday 21 October for an update on the progress of this European project which will end in June 2022.

Two Luxembourg companies, supported by Luxinnovation, have joined the 5GCroCo consortium: POST Luxembourg and SEC Consult (part of the ATOS group since the beginning of this year). “This is part of our mission to encourage and stimulate companies to set up collaborative projects and then help them to integrate such European consortia,” explains Anthony Auert, manager of the Luxembourg AutoMobility Cluster at Luxinnovation.

POST Luxembourg is one of the three national operators involved in the project (alongside Orange, for France, and Deutsche Telekom, for Germany). SEC Consult is involved in certain issues related to cybersecurity.

“From the very beginning of the project, Luxinnovation advised us on the official framework conditions, as well as on the specificities of European projects,” testifies Frank Trenz, formerly Head of Business Development at SEC Consult Luxembourg (and now Sales Manager Cyber Security by ATOS Luxembourg PSF). “Together with them, we were able to apply our know-how to this fantastic project.”

A total of 24 partners from the European automotive and mobile communications sectors (as well as regulatory authorities) in seven countries are working together on this pilot project. On Thursday, three concrete case studies gave impulse to a number of live demonstrations: remote driving, the generation and distribution of high-definition maps in real time and, lastly, collision avoidance.

“The main challenge is obviously the need for seamless connectivity in border areas,” indicates Dr Dirk Hetzer (Deutsche Telekom AG / T-Systems International). “The 5GCroco network is not a production network, but a test/experimental network. As such, it is optimised for agility, which allows new technologies and applications to be tried out. In any case, it allows us to push the boundaries.”

Tests conducted for more than two years have established that the 5G network is optimal for minimising latency and increasing the speed of data transmission. “We developed this project on a dedicated network, which allowed us to work on dedicated configurations and test new features,” explains Cliff Konsbruck, director of POST Telecom. “This will allow us, on the day this network is deployed in full scale, to have all the necessary parameters directly available.”

The Luxembourg test area covers a triangle between Schengen, the Croix de Bettembourg and the French border at the former border crossing on the A3. POST Group has deployed “old generation” 5G antennas there since 2019, which will be deinstalled after the end of the project scheduled for June 2022.

The rest of the 5G network, which is planned to cover the entire country by the end of 2022-beginning of 2023, will therefore benefit from all the information gathered in the framework of 5GCroCo. With benefits that go far beyond the sole question of mobility. “5G technology is perfectly in line with the current movement towards the digitalisation of the economy and the evolution towards Industry 4.0. Many areas, such as health, will benefit from it. Take the example of connected objects: with the 4G network, the battery life of the sensors in these devices is at most one year. With 5G, which uses less energy, it will be 10 years.”

“At the beginning of next year, the government will launch a new call for applications from Luxembourg companies,” Mr Konsbruck points out. “The aim will be to identify future applications of 5G technology and to form new consortia to achieve this.”

In the field of mobility, however, patience will be required, as the technologies presented in Schengen are not expected to be implemented in the vehicles of “the man in the street” before 2024-2025. It will also depend, in many cases, on the evolution of the legislative framework.

“At present, tests are being carried out in seven well-defined corridors,” specifies Jorge Pereira, project officer for the European Commission. “Eventually, within seven years, we hope to reach 50 corridors, so that it will be possible to cross the entire European Union without any network disruption.”

Are you interested in being part of the Luxembourg AutoMobility Cluster? Find out more and apply for joining.

The ESRIC start-up support programme is the world's first accelerator and support scheme dedicated to space resources. It is open to start-ups worldwide, and interested candidates are invited to submit their applications by 23 January 2022.
Read more