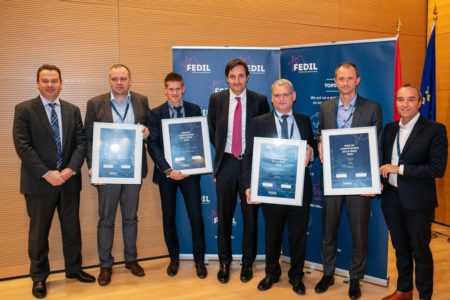 Every two years, innovation is highlighted by FEDIL – The Voice of Luxembourg’s Industry. Alternating with its Environment Prize, the Luxembourg federation of industrialists rewards innovators working for companies, independent innovators and young researchers.

“The projects submitted must stand out for their innovative and original character, while being of interest to the Luxembourg economy”, says the description of the prize, whose 2020 edition has been launched. It would, in fact, be more accurate to speak of prizes, as there are several awarded each year.

In 2018, for example, four of the 20 or so applications submitted were rewarded. They included “heavyweights” such as Goodyear (for its “Vacuum Cure Technology” project, a mould technology for vulcanising tyres under vacuum) and Cebi (for its Blow-by Heater technology, an electric heating system used to remove ice that can form in an engine block duct), but also lesser-known companies, and even start-ups.

The SME Virelux Inspection Systems, for example, was awarded for its “Optifrag” system for the automatic control of car window fragmentation using an automated optical solution. The start-up Docunify (which has meanwhile been acquired by Victor Buck Services) was rewarded for the implementation of its digital Admintech platform for secure collaborative work.

Even for “innovation champions” such as tyre manufacturer Goodyear, such an award is not insignificant. “The fact that our technology has been awarded by FEDIL as one of the best innovations in the automotive sector is a great recognition,” confirms Alexander Verstappen, Communication Manager GIC*L & SDC*H at Goodyear. “This is especially important for all our employees who have worked hard to develop the solution.”

The recognition for the teams involved is also important to Lynn Elvinger, member of the Cebi International Management Board and Raymond Mohrbach, Cebi Luxembourg’s Managing Director. The company had already received an award in 2014 – when it was still called ELTH – for a project involving a plastic elbow probe for measuring the oil level in combustion engines. “This type of award undoubtedly provides additional motivation for our R&D teams to invest more in the search for innovative solutions.”

For many companies, innovation is not an option, it is an integral part of their raison d’être. This is the case of Virelux Inspection Systems, a company specialising in automated quality control. “As a technology company, innovation is our daily business. We didn’t wait for this award to get started,” explains its CEO, Tom Reichert. “The fact that we have been awarded this prize by an external jury confirms our choices and shows that all our teams are moving in the right direction. It’s nice to be able to share this success with them. In addition, this award has given us a certain credibility in the market, especially in France and Germany. It did not, however, instantly boost our sales, but the impact in terms of notoriety is obvious.”

The company, whose activity and workforce have grown between 30 and 40% in the last two years, is planning to present a new project for the 2020 edition of the prize.

The spotlight brought by such an award is not to be neglected, especially in a market such as Luxembourg. “The main interest of this prize is that it gives the winning company a very good visibility,” confirms Marc Ferring, Director R&D and Innovation Support at Luxinnovation. “It is a great opportunity to showcase truly innovative achievements that do not always have the opportunity to be appreciated in this way.”

Initially set for 10 July, the deadline for submitting applications has been extended to 20 July 2020.