Just four months ago, the Küb concept store opened in Dudelange. Flashback to a milestone in Dudelange’s retail landscape. 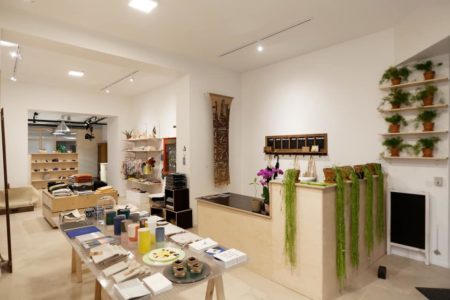 Sustainable development, culture and sharing: this are the three things that supported the creation of the Küb concept store, inaugurated in Dudelange on 28 September.

Behind this project are two graphic designers, Laura Folschette and Olli Eickholt, both driven by a very precise vision of consumption and more generally of their environment.

“Our idea was born out of the fact that there are not many places where the Luxembourg creative scene can present itself or offer its products,” explain the two partners, who run their own graphic agency, Kontext. “In New York and Luxembourg, for example, designers like Roxanne Flick sell their products ‘only’ in a museum context. So we wanted to create a place that functions as a platform, with a shop that also offers sustainable products from abroad. We wanted to show that Luxembourg design is on the same level as international design.”

On the 180m² of the Küb you will find both work and sales areas. The latter is exclusively devoted to artists and craftsmen who have met certain criteria: use of ecological (often recycled) materials of reasonable geographical origin (preferably from Luxembourg and the Greater region); objects fulfilling a real function (and therefore not only decorative)…

The shop also offers books by Luxembourg illustrators such as Pit Wagner or works of art by the design creator Roxane Flick.

“For several years now, Dudelange has been striving to make its town centre even more welcoming and friendly,” explains Claude Leners, City Manager of Dudelange. “This Küb project is the fruit of the reflections of our ‘Observatory’ working group, created as part of our efforts to modernise the town centre’s infrastructure.”

Niche trade has been identified as one of the spearheads for increasing the city’s commercial attractiveness. To do this, the city rents its premises to certain owners, which it then sublets at a favourable price for the first few years.

An answer to a need

The approach of the City of Dudelange criss-crossed that of Laura Folschette and Olli Eickholt: “We had harboured the idea of something along these lines for a long time and when the municipality of Dudelange took the initiative and launched a call for tenders for a creative concept for a new store in town, we jumped at the chance”.

In less than six months, the Küb concept has found its cruising speed and there is no shortage of development projects.

“The creation of this concept store meets a need often expressed by freelancers in the creative industries sector”, notes Marc Lis, the manager of the Luxembourg Creative Industries Cluster, who can only note how difficult it is for an independent designer to present his work, due to the lack of a showcase to help him display his products. “Our platform www.creativecluster.lu is a tool that goes in this direction, but a physical place, where customers can see and touch the products first hand, remains important.”

The sustainable dimension of the concept store also illustrates a strong trend within the creative sector: all players are increasingly aware of the resources and raw materials used and are working to reduce unnecessary waste as much as possible.

“Overall, this is an excellent concept, which addresses a number of important issues and offers additional solutions for creative people,” says Lis. “And this is done under affordable conditions, which is not always the case elsewhere for creative people who are in the launch phase.”

Emergency aid for small businesses and the self-employed

In the context of the Covid-19 crisis, the General Directorate for Small and Medium-Sized Enterprises set up an emergency fund for very small companies and the self-employed.
Read more