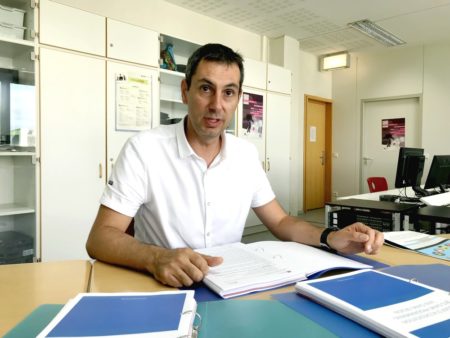 Arts et Métiers is one of three establishments in Luxembourg (with the Esch Technical college and the brand new Edward Steichen college in Clervaux) to have the “FutureHub” label of excellence awarded by the Ministry of Education.

It is about valuing and highlighting the efforts of an institute of further education to open up to technologies and innovative learning of science, especially computer science. “This means that we are able to use these new technologies in teaching in a holistic and concrete way, identifying which applications are possible with which tools,” explains Fabrice Roth, Computer Science Teacher and FutureHub Coordinator

The creation of these three new BTS courses is part of this approach. It also meets the needs expressed by companies. “Recently, we heard about a large gaming group in Korea that set up its European offices in Luxembourg, but later left the country because they could not find the skilled people they needed,” testified Mr. Roth. Initiated over a year ago, the evaluation of the need for such diplomas was then based on a preliminary market study that only confirmed the validity of the approach.

“We have seen how much the sector is already very present and highly motivated in Luxembourg. The companies already here can only encourage others to join them. We are therefore focusing on two aspects: education, to create this pool of qualified people, and economics, to set up an environment likely to attract a large number of international firms to Luxembourg. In colleges of higher education, we create tomorrow’s generation of entrepreneurs and the economy of tomorrow. Directly benefiting from input from actors in the field greatly helps us in developing and adapting a leading-edge offering. We also have a site in the city centre which brings together students and business professionals under one roof, in a spirit that is close, proportionally, of course, to that of Silicon Valley.”

A partnership has also been formed with Isart Digital, the International College of Video Game & Animation 3D-FX, based in Montreal and Paris (with a partnership in Tokyo). It is the 3rd best college in the world in game development “, says Fabrice Roth. “We are going to sign an agreement to allow our graduate students in BTS to be able to do their 4th year of masters at home.”

In the process of validating these BTS courses, the contribution of Luxembourg Creative Industries Cluster managed by Luxinnovation, was essential, especially as a facilitator for creating contacts and networking. “The fact that the cluster president, Jan Glas, is also a teacher at LAM has obviously helped a lot,” says Roth. “Moreover, the Luxembourg ICT Cluster, of which we are also a member, also helps us to develop a relationship with national and international companies.”

The involvement of the Luxembourg Creative Industries Cluster has been ongoing, from the initial letter of intent to the completion of the project. “We defended the file in front of the group of experts in charge of providing the training,” says Marc Lis, the Creative Industries Cluster manager. “It was important to show why it makes sense to promote training of a workforce that can then attract international companies to Luxembourg. In this respect, we also received the support of the Ministry of the Economy, highly supportive of this initiative to unite the world of education with the various actors in the economic world.”

As for the more “technological” component, it fits perfectly into the government strategy of a data-driven economy. “Data is the wealth of tomorrow, and IoT is just one way to exploit that data,” says Jean-Paul Hengen, the Luxembourg ICT Cluster manager. “Industry 4.0 is also largely based on IoT. With this BTS diploma, graduates will be immediately employable in the industry and, in a broader sense, in all ‘smart’ areas that are currently being developed.”

Events as a bonus

Given the wealth of skills required, the two BTS “Gaming” courses at LAM will evolve in a way that they complement one another perfectly: the BTS AG will focus on design, story-telling, visual and textual creation of a game, with a small programming component. On the other hand, the BTS GP will focus more on the ICT aspect, with a little design thrown in. “It would not have been possible to combine all areas of expertise in one diploma over two years,” explains Fabrice Roth.

As for the BTS IoT, it will allow a global coverage of processes, from the original idea to the production of a prototype, integrating all aspects of technology and aesthetics. These new courses which will start in September, should each be frequented by 12 students, to ensure the most personalised education possible. Each student will also participate, as part of his training, or organise a number of events in direct line with their activity. The creation of a Global Game Jam that will take place at LAM is planned.

Technology and road transport: have your say!

Automotive companies are invited to participate in a European study on the impact of technological developments on the transport market.
Read more

The first edition of the Circular By Design Challenge started at the beginning of 2021. The selected start-ups are following an intensive coaching programme that will last until spring. Here is the continuation of the participating companies' testimonials.
Read more