The University of Luxembourg’s Interdisciplinary Centre for Security, Reliability and Trust (SnT) has entered a collaborative research partnership with manufacturing firm Cebi.

The signature ceremony, which took place on 5 April, marked the beginning of a 4 year-long project supported by Luxinnovation and the Ministry of the Economy to bring Industry 4.0 to Cebi’s flagship factory in Luxembourg. The project aligns with the national strategy for the development of Luxembourg (Rifkin study).

The last five decades have involved filling factories with computerised machines capable of handling repetitive tasks more quickly, efficiently and accurately (referred to as industrial automation). Industry 4.0 is now taking this a step further and involves allowing these machines to share their data, communicate with and even control other machines.

SnT researchers will work with Cebi Luxembourg S. A. to make this network of machines (an example of the ‘Internet of Things’) a reality at their site in Luxembourg. Since its establishment in 1976, Cebi has invested considerably into innovation, and this project is a logical consequence of the company’s involvement in this domain.

Enabling every machine in a factory to communicate within a shared virtual space has huge potential benefits. Machine learning algorithms can use this data to monitor the factory’s overall performance in real time, understand and predict technical issues, and advise engineers on what to do about them. The barriers to adopting such an approach, however, are still very high.

“For decades individual suppliers have built factory machinery using their own proprietary software, systems and communication protocols,” says SnT researcher Dr. Jérémy Robert, an expert in industrial networking, who is leading the research. “As factories use machines from multiple brands, it’s as if they’re all speaking different languages. The data they produce is incompatible, so the machines at stages one and two of the production process, for example, can’t talk to one another. We need to analyse the existing hardware and software systems, and develop an ‘open source’ IT infrastructure to break down these ‘language’ barriers.”

Once this raw data is all in one place, the second stage of the project involves turning it into actionable information. Robert and his team will work with SnT spin-off company DataThings, which specialises in live machine learning and real-time analysis of sensor data, to process the huge amount of information the factory produces on a daily basis.

“These ‘machine learning’ algorithms will learn from patterns over time in order to know whether the factory is performing efficiently,” continues Robert. The project aims to develop an industrial research approach to the Industry 4.0 challenge with a strong focus on open standards, ensuring that manufacturing units are more interoperable and flexible. 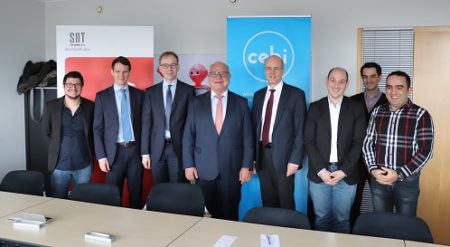 “Our objective is clear,” says Paul Elvinger, Member of the Executive Board at Cebi. “We want to use new decision support tools and services to significantly increase Overall Equipment Effectiveness [how well production performs relative to expected capacity]. These tools range from live monitoring of different generations of machine tools and performance indicators, to more advanced digital services such as predictive maintenance, manufacturing system optimisation and autonomous factory operations.”

Significantly, the project will also enable protocol definition across a wide-range of manufacturing industries currently using a wide range of production technologies. “It will be several years before this research can enable large-scale technology deployment across different shop floors of the Cebi Group, but we are paving the way to removing a major entry barrier to the realm of digital manufacturing,” continues Franck-Alexandre Sallebant-Bessone, the Corporate Project Manager of Cebi International who is driving the Industry 4.0 program at Group level.  “This will enable other manufacturers to embrace these technologies more easily.”

The DigiJourney projet, of which Luxinnovation is a partner, has released a Design Options Paper providing recommendations for European innovation agencies on how to improve their digitalisation support services for companies through a well-designed client journey.
Read more

A new centre for technology development

In 2019, Luxinnovation supported a growing number of international companies opening offices in Luxembourg. One of them, HighSide, has chosen Luxembourg
as a centre for developing its highly secure messaging and files platform that protects users against phishing, spoofing, mass data breaches and insider threats.
Read more

Digital factories: objectives, benefits and how to get there

Smart, digital factories, where equipment and systems are interconnected and communicate in real time, are the very heart of Industry 4.0. The 8th DIH Talk focused on the concrete benefits of digital processes and on how to put them in place.
Read more

While new technologies are the basis of Industry 4.0, human beings remain the most central element of a successful digital transformation. The L-DIH Talk on 14 May 2020 focused on how to define and acquire the digital skills needed to be competitive in the future.
Read more