Contern S.A. (formerly Chaux de Contern) has been manufacturing precast concrete products to be sold both nationally and in the Greater Region for nearly a century now. Its range consists of around a thousand products ranging from masonry blocks to piping and tubing and everything in between, including cobblestones, paving stones and other garden accessories. 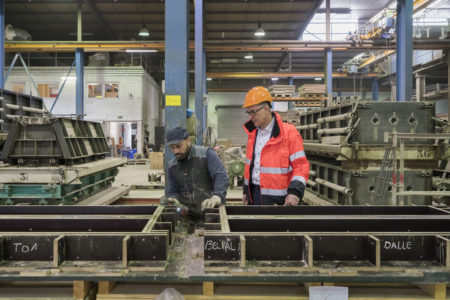 Despite its strong position in the local market, the company still faces strong foreign competition and its activity is still very sensitive to weather-related risks. “This being the case, manufacturers achieve low margins and have to make every effort to improve their organisation and set themselves apart with new products offering added value”, Contern MD Eric Kluckers explains.

One of the problems that was identified with regards to the overall running of the company was a certain element of ‘under-performance’ on the part of the Precast division, with a turnover that was slightly down, a poorly controlled activity management process and a decline in production team efficiency as a result of spending a lot of time (30-40%) performing tasks that brought no added value (cleaning machines, starting up, etc.).

“Our company has always been open to change and innovation”, Eric Kluckers explains. “The operational aspect, however, often prevents us from investing in innovation, research and improvement projects for any sustained length of time, which is why we had chosen a department that produced interesting products that were also some way behind others in economic terms”.

Having joined the Fit 4 Innovation programme in spring 2016, Contern S.A. was able to give structure to and indeed develop certain ideas that it already had in the pipeline thanks to the help of an external consultant. A five-step action plan was drawn up, including the introduction of an operational management system, effective planning and an activity management process, but the configuration of the workshop also needed reviewing, all whilst continuing to look out for any innovative new initiatives that might be of interest to the department.

The objectives of increasing activity levels in this division and improving its operational efficiency were eventually met. “We managed to significantly and sustainably improve the contribution margin generated by this department”, Eric Kluckers is delighted to announce, “whilst the teams also became more motivated and more independent as a result. Our experience was a great success, thanks also to the effective collaboration between the internal teams and the consultant, who adopted a very pragmatic approach”.

The process obviously didn’t stop when the Fit 4 Innovation programme ended; indeed, Contern S.A. has since introduced a series of research and innovation projects under the ‘Cross Roads’ banner. “We had to choose between following the other players in the market as they faced tighter and tighter margins or innovating, launching new products and leading by example in pursuit of new markets. We chose the latter option and have made a success of it. The Fit 4 Innovation programme is clearly the perfect tool for any SME looking to make organisational changes or reposition itself moving forward”.

The forest/wood sector is facing many challenges that go far beyond the health crisis linked to COVID-19. But ideas and know-how for how to overcome them abound.
Read more

In partnership with the French company 3D-Oxides, the Luxembourg Institute of Science & Technology (LIST) is working on a research project designed to make hydrogen production easier, cheaper and more environmentally friendly.
Read more

The Green Deal call has been published on 17 September. Please find the recording of the session here. You can download the slides.

At the initiative of the Ministry of the Economy and Luxinnovation, three webinars (in French, Luxembourgish and English) provided a better understanding of the law of 24 July 2020 aimed at stimulating business investments in the COVID-19 era.
Read more

Citizen engagement is a cornerstone of the co-designing process of Horizon Europe.
Read more

The COVID-19 pandemic is expected to have a profound impact on business strategies. Luxinnovation predicts that changes in consumption patterns, the emergence of new forms of entertainment and tourism, the increased importance of remote working and new forms of innovation spurred by the crisis will lead to new business models and opportunities.
Read more

For the second year, the Greater Region consortium ProdPilot will award its grand prize with the aim of making companies aware of productivity potential.
Read more

Becoming resilient in the face of future crises

Although COVID-19 is far from the first economic crisis to impact our society, its depth and breadth has brought the issue of resilience and being prepared high in the public conscience. Sara Bouchon, Head of Market Intelligence at Luxinnovation, and Mohamed Toumi, Market Intelligence Analyst, speak about resilience as one of the main market trends that will impact the economy in the years to come.
Read more

Rebuilding the economy for a sustainable future

Sustainability is one of the major market trends identified by Luxinnovation that will shape the post COVID-19 economy. Head of Market Intelligence Sara Bouchon speaks about how the increased awareness of sustainability issues brought by the coronavirus crisis will influence both policy makers’ choices and consumers’ preferences in the next few years.
Read more

How digitalisation will drive growth and transform society

Digitalisation is one of the four megatrends identified by Luxinnovation that will radically transform business and society after the COVID-19 crisis. Market Intelligence Analyst Mohamed Toumi provides insights into how companies will need to transform their activity in the coming years to retain a competitive edge.
Read more

A cooperation agreement was signed between the Luxembourg Space Agency (LSA) and the Luxembourg Institute of Science and Technology (LIST) aimed at creating a European Space Resources Innovation Centre (ESRIC) in Luxembourg by the end of 2020.
Read more

On 22 July 2020, the Chamber of Deputies unanimously approved the bill implementing a new aid financial aid instrument aimed at encouraging companies that have suffered the impact of the COVID-19 crisis to carry out economic development, digitalisation and environmental protection projects. Firms are invited to join a series of webinars providing further information about the scheme.
Read more

Market trends that will shape the post COVID-19 economy

The global crisis brought by the COVID-19 pandemic will have an enormous impact on the economy and society of the future. Luxinnovation has just published a report identifying the major market trends and innovations that will drive the post COVID-19 economy.
Read more

Bertrand Piccard's Solar Impulse Foundation is looking for 1,000 innovative solutions that can protect the environment in a cost-effective way. Luxembourg companies are invited to get involved!
Read more

The DigiJourney projet, of which Luxinnovation is a partner, has released a Design Options Paper providing recommendations for European innovation agencies on how to improve their digitalisation support services for companies through a well-designed client journey.
Read more

The 24th edition of the Innovation Prize awarded by FEDIL is currently under way. The deadline for submitting applications has been extended until 20 July to allow companies to better promote their innovative projects.
Read more

With the Creatives Unite platform, the players of the creative and cultural industries (CCIs) have a tool to share good practice and experience related to the current health crisis. IPIL is one of the stakeholders of the European project “FLIP for CCIs”, which supports this initiative.
Read more

Missions are a major novelty in the future framework programme for research and innovation, Horizon Europe. Interim reports and proposed Missions have been published.
Read more

The EIC Fund is now up and running!

The EIC Fund has become an official entity, filling the funding gap at the start-up stage.
Read more

Luxembourg one of Europe’s innovation leaders

The European Innovation Scoreboard, published by the European Commission, ranks Luxembourg among the EU’s innovation leaders. The main reason is the country’s attractive and efficient research ecosystem.
Read more

The initiative aims to reach a climate-neutral Europe by 2050 to face the current and future environmental challenges.
Read more

Attracting experts for companies and academia via MSCA

As the national contact point for Horizon 2020, Luxinnovation is offering support to postdoctoral candidates and research organisations (public and private) willing to participate to the Marie Sklodowoska Curie Actions (MSCA).
Read more