Design and carpentry with a musical touch

An innovative start-up; an inspired design office; a productive carpenter... this is the composition of an efficient trio that has pioneered a joint project bringing together the worlds of music and design, between Paris and Luxembourg.

Home » Design and carpentry with a musical touch 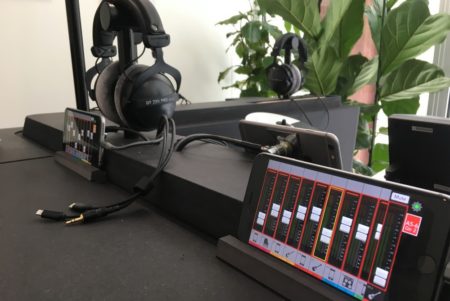 To carry out this project, the company called on designers from… Luxembourg: Anne Kieffer and Arnaud Mouriamé (Studio delle Alpi), who met by chance through a common acquaintance. “Jamset’s request was to develop a furniture concept that could integrate real musical instruments – guitar, electronic drums, keyboard – on a single support, including all hidden and secure connections and tablets to control the instruments or the mixer,” the designers explain. “This piece of furniture represents the visible part of a whole community approach to music.”

One year for preparation

From the first exchanges to the 3D models, the project took a little less than one year to come to maturity, with a push towards the end, as Jamset was in a bit of a hurry to be able to present a real prototype to the market. “The challenge was both aesthetic and technological, because it was necessary to solve the problems of connection, space, mobility and to make this piece of furniture all-purpose. As it is likely to be used in very different environments, but it must give people the same desire to use it.”

For the transition from “paper” project to tangible reality, Studio delle Alpi consulted several furniture manufacturers in Luxembourg, France, Germany and Italy. However, the importance of proximity between the various stakeholders led to the final choice of Menuiserie Kraemer in Bettendorf, near Diekirch. “We had the opportunity to meet during an economic mission to Italy with the Chamber of Commerce, which facilitated contacts,” explains Anne Kieffer.

Patrick Elsen, managing partner of Kraemer Carpentry, immediately liked the project. The choice of material was very quickly made for MDF (Medium Density Fiberboard), which combines both strength and ease of handling.

“For a prototype, it is the ideal material that meets the requirements of robustness but  acoustics too, and also allows the material to be processed once the furniture has already been assembled,” he explains. “The main difficulty was that we had to work with rounded surfaces at double angles, which left us very little margin for error in the positioning of the different elements.”

Being a little bit more complicated than for “traditional” kitchen elements, the design of this piece of furniture also included a modular dimension that had to be taken into account. The preliminary work of the design office within the joinery took much longer than for a “classic” piece of furniture. “Then the production deadlines were very tight, because Jamset wanted to have its prototype as soon as possible,” says Elsen.

Started at the very beginning of the year, this piece of furniture was finally delivered at the beginning of the spring: a beautiful “baby” of some 450 kg, with dimensions of 2.5 x 2 metres and a height of 95 cm, officially presented at the Hotel W Paris-Opéra, the first to now offer this music studio with free access.

“Today, it is estimated that there are 300 million amateur musicians and more than 100,000 places that can accommodate a Jamset. We are at the very beginning of our history,” explains Olivier Milcent, one of the company’s co-founders, in a recent interview for a site specialising in the hotel industry.

Such a story could therefore have strong Luxembourg connections. For the time being, Jamset is still looking for investors and customers to move up a gear and consider larger scale production.

Studio delle Alpi and Menuiserie Kraemer are both active within the Luxembourg Creative Industries Cluster. Are you interested in joining it? Contact us!

Creative industries and the crisis: the way forward

How can creatives survive the current crisis and find new opportunities for tomorrow? The Luxembourg Creative Industries Cluster invited three international experts to share their views in a webinar to answer just these questions.
Read more

This year’s edition of the Cleantech Forum Europe, to be hosted in Luxembourg, has been postponed to 7-9 December 2020. Until then, a series of monthly online events will explore ideas and innovations that will help us accelerate the transition to a cleaner world. The first one, “Innovating for Resilience”, will be held on 19-20 May. Luxembourg remains a key partner.
Read more

Communication in the time of crisis: the way forward

Handling information and communication correctly during the current pandemic is essential for all companies. During a webinar on 28 April 2020, members of the Luxembourg Creative Industries Cluster shared their experience of processing information to take the right decision and strengthening their position through efficient communication.
Read more

It is through the Fit 4 Start program that Aiva Technologies, which develops algorithms based on artificial intelligence to compose music, has embarked on an accelerated innovation process.
Read more

The Games and Interactive Digital Media Association (GIDiMA) is officially active. This organisation aims to support the development of an industry in vogue in Luxembourg: video games and interactive media.
Read more